The Carnival Ain't Over

The drum beats louder now. A movement going through the crowd. Dressed up and painted people everywhere. The man with the stag mask is banging his stick on the ground. A gaggle of children, faces smeared green and flowers in their hair, weave in and out of the crowds. The Jack is coming, the Jack is coming! they scream. Everyone's attention now focused on the spot where the Jack will come out, as he does every year. The woman with the raven feather coat is brushing past as she makes her way to the front of the crowd. Louder the drums and louder still, and then he is there. The Jack has emerged to earsplitting whoops and clapping. They lead him now, the tall figure entirely covered in leaves, lead him on his path through the town, watched and cheered by the crowds. Even though the sun is shining, a strong wind blows in from the sea, the seagulls riding high on its gusts. The people follow the Jack through the narrow roads, past the brightly decorated houses, more and more of them spilling out into the streets to walk with the Jack up the steep hill to the ruined castle, where he must go. And they keep him there all day, surrounded by drums, the drums never leaving his side, never missing a beat. Groups of people, adorned with ribbons and leaves and flowers are milling about. Wild men with beards and straggly hair, their bodies smeared in green paint. Wild women too, proudly displaying their womaness. A small group has gathered around a band of itinerant musicians. The townsfolk and the strangers, old and young, all strangers to their normal selves today more than to each other, they sit and dance and drink and sing together. All the while on the highest point of the hill, they fiercely guard the Jack. And when the dancing fades, finally, the drumming rises again and they bring him down now. Right into the middle of the baying crowd. The people are waiting for him, they want him. They all know the Jack must die, as he dies every year, after he has given his lifeforce to the land. He dies to rise again in next year’s spring. This is so. Drums and whooping now drive each other to a crescendo and then, suddenly, all fall silent for an instant. And now they erupt again. The people batter and push the Jack until he topples over and they descend on him, ripping the green fresh leaves from his body until none are left, they slay the Jack until he is spent. The crowd scrambles for a piece of him, cheering for every green leaf and twig. And then he is gone. An excited calm settles. The people now disperse over the hill, happily chatting and laughing. Some will make their way home now, but many will stay and there will be much merriment across the town tonight.

And all around for another year, the cycle continues.

This is not a scene from a tribe in a remote corner of the world, nor is it from a long gone time in England. It happened in May 2011 in the town of Hastings on the East Sussex coast, exactly so.
The Hastings Jack in the Green celebration – despite involving May queens and Morris dancers - is not a quaint little festival of people stuck in a romanticised past. Neither is it a fringe alternative hippy gathering. It isn’t even a disneyfied rehash of a traditional festival. It’s a bit of old and a bit of new, lots of peoples’ love and effort. Surprisingly, it has managed to avoid commercialisation, and I almost don’t want to talk about it, so nobody gets to know. But judging from the growing crowds there every year, word has got out anyway.
Much has been said and written about the traditional folk festival and the carnivalesque (not just in the Western sense but also in other cultures under different names) particularly in cultural anthropology and literary theory: the time outside time when normal rules are suspended, when masks and costumes adorn bodies, when the grotesque reigns in the streets, when power is mocked and hierarchies are turned upside down temporarily. Also where natural forces and cycles are given reverence above those of human society. Much has also been argued about the revolutionary potential of Carnival and folk festival as a cultural phenomenon – some see in it a tool for a permanent overthrow of the established order, others argue that it is a particularly cruel and effective way of strengthening this order by allowing the masses a temporary release. As with most things, I would argue that it’s neither completely one or the other, but I don’t really want to argue here at all. I want to share what I see and feel in my fellow human beings on occasions like Jack in the Green.
I have talked before on this blog for my love of wild things. I don’t mean the wild as something out there, remote, past, far from us. I’m interested in the wild inside us, every little half forgotten remnant of it, and in shining a light on the corners where it hides in the perceived normality. And I feel that the carnival, the folk festival (in the widest sense of the word) is a time and space where we can experience that which is wild in us. Where the wild creeps up on us and maybe not everyone notices, but it leaves a little imprint, a little memory. Note that a lot of these kinds of festivals happen outside, in nature, in the streets. What strikes me also is the palpable sensuality in the air on those occasions, and the revelling in it.
People come together who would not mingle in everyday life. And meet each other not looking like they do in normal life. While there are a lot of dedicated Jack in the Green participants who take the whole dressing up aspect very seriously, I notice that many other adult visitors do it tentatively, maybe spurned on by their kids, and then seem completely surprised by the sheer joy it brings them. I’m sure that many use the opportunity to embody and express those aspects of themselves that “normal life” - the rational, ordered culture of productivity - has no sense or use for.
Next weekend, there is another festival in Hastings. The good people of that town love a festival, and they love a bit of mayhem, it seems the more theatrical, the better. So a couple of years ago, they invented Pirate Day. Last year, over 6000 people of all ages and backgrounds dressed as pirates descended on Hastings, and a Guinness Book of Records accolade was awarded. But that is really not the point and to those smelling a ploy to inject life into the local tourist industry, well maybe, but that’s not what concerns me. The day was a blast.
As with the Jack, the town was harking back to some aspects of its history and identity (piracy, smuggling, irreverence and rebelliousness). Of course, there is a major romanticising of the image of the Pirate going on with all this. Pirates are popular, and they even had a Jack Sparrow lookalike in Hastings. Disney got in on that one. But let’s examine this pirate image more closely. Irrespective of what real historical pirates were - what are pirates to us? They are rebellion, self-determination, flamboyance, wildness. Not exactly the qualities that our culture demands, nurtures or even tolerates. But qualities we crave, however domesticated we may seem. You can sense the desire for this in the air on Pirate Day, just as you can sense the desire for a remembering of natural forces and cycles and the aliveness of it all at Jack in the Green. 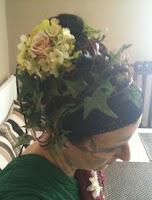 And so what, says a voice, what will it change? I don’t know. I suspect some will go away and forget how they felt that day when they experienced forgotten parts and other possibilities of themselves. The little memory packed away safely to be able to return to the machine and function. Something old and wild and flamboyant, something about nature and cycles and the joy of green leaves and face paint, shared with many. But for others, the temporary physical embodiment, the theatrical experience of another kind of being  may be a spark, a desire for more of this taking a stronger hold, an ignition of the imagination, a crack in the veneer, a growing seed. Something.